As Command Module Pilot for Apollo 11 in 1963, astronaut Mike Collins orbited the moon alone while his co-explorers Neil Armstrong and Buzz Aldrin famously landed, walked and hopped on our night light in the sky.

Alone, on the far side of the moon away from Earth, Collins was truly not of this world.

A friend, when she was little, woke up one morning and decided to surprise her mother by getting ready for kindergarten without having to be asked.  When she showed up, all dressed and set to go, her mother looked at her and exclaimed, “Today is a Saturday!  You don’t go to school on Saturdays!  What were you thinking?”

Most if not all of us know the pain of extending help or acting in a way that we thought would contribute to the happiness and well-being of another, only to be rebuffed, ignored or scolded.

Years ago, as a young mother, I was visiting my parents.  We were just starting to figure out what we wanted for lunch.  The doorbell rang, and it turned out that Daddy’s boss had stopped by unexpectedly.

I knew my family wanted to eat but couldn’t while Daddy’s employer was there, so I put together some cheese and crackers to tide us over until we could have lunch.

When our visitor left, Daddy and I stood by the front door, and, instead of thanking me for taking care of the family’s need to eat, he castigated me, threateningly, harshly reprimanded me for leaving a hallway door open.

The gospeler John infused his prologue with the poignancy of this truth:

He was in the world, and the world came into being through him; yet the world did not know him.  He came to what was his own, and his own people did not accept him.

With solemn reverence: throw away respect,

For you have but mistook me all this while:

And just as the prophet Jeremiah did.  A Hebrews scriptures scholar explained to a class that Jeremiah, as he followed God’s command to warn his people that it was time to repent, not only became a “laughingstock” in his community but came to believe that God had repudiated, abandoned him, betrayed him.

When the professor told us how Jeremiah felt, we all looked at each other and asked, “Is that going to happen to me?,” exposing the deep fear of not belonging within all of us.

A friend once said to me that not all people like the light.

The Franciscan Sisters of Mary in St. Louis responded to Martin Luther King, Jr.’s call to religious leaders to join the 1965 march in Selma; when they got home to Missouri, people criticized them for participating in the march and couldn’t understand why the nuns would take part in the civil rights movement in Alabama.

In his extraordinary book Blood at the Root, Patrick Phillips writes about his parents, having grown up in Birmingham during the era of George Wallace and Bull Connor, taking part in civil rights marches and enduring taunts as they walked alongside the other protestors, black and white.

Yes, it is hard when we think about the loneliness, abandonment and rejection that can come as we follow God’s way in our own lives.

But what if we learn to take that in, to be okay with it?  What if we think of it as part of being God’s chosen people?   What if we decide not to resist the idea but relax into it?

We know that, apart as we are, we are not alone.  We have each other, we have God, and in these passages, Jesus promises that the Holy Spirit will  come to us to be our comforter, guide, protector for all time.

Sometimes, it’s like going through a siphon in a cave.  To get to the next room, we have to hold our breath, go under very cold water, squeeze through a narrow passageway or small hole and resurface on the other side.  In mapping and charting caves, the explorers sometimes don’t know what they’ll find, if anything.

My friend was never able to reconcile with her mother; not just about the getting dressed for kindergarten without having to be asked experience, but because chronic anger and resentment characterized their relationship.

Eventually, however, Daddy and I reconciled, not about the door not being closed episode, but as a whole.  And for the last 12 years of his life, we had the relationship that I had always hoped for.

It turned out that even though I felt rejected and unappreciated, treated unfairly, God was out there with me.  And, in time, God brought Daddy and me into a whole new place where we could rest easy in our love, trust and respect for each other.  And I am forever grateful for that.

In one section, an old man walked onto the stage, withdrawn into himself, staring into space.  A nurse helped him to bed, and then suddenly red demons appeared, crawling and scuttling all over the room.  The old man got out of bed and watched them for a while, then he touched one on the shoulder, their red horror slipped away and they began to dance gently around the man’s bedroom.

And later, the dancers touched the old man, bringing him out of his loneliness and apartness and brought them into their community.

So when we act in a way we feel God is guiding us to act, we may very well find that we are not of this world.  But just as surely, we will know that God is out there with us, and we can watch and pray, anticipating how God will work with us out there, and if we look, we’ll find other lights flickering, keeping us company in the dark of space. 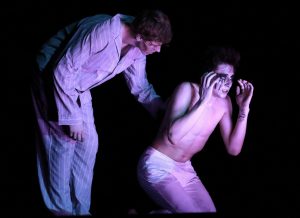 6 thoughts on “Not of this world”