The year 2015 has come to us bearing 70-year anniversaries commemorating events of great import: VE Day, VJ Day, the bombings of Hiroshima and Nagasaki and the liberation of concentration camps in Germany and to the east.

In April, my family and I traveled to Germany to attend the liberation anniversary remembrance at Bergen Belsen concentration camp in the north central part of the country.  My former father-in-law Dick Elberfeld had been one of the liberators in 1945 at Bergen Belsen and had remained connected to camp survivors. His daughter Anne has continued to honor the liberators’ grand acts and nurture relationships with the survivors since Dick’s death.

When Anne learned that we were going to be at Bergen Belsen in April, she told us to look for a survivor named Hetty.  We had no description of her except that Anne told us that Hetty would be wearing a pink coat. We found her right away – blonde, vivacious, in her mid-80s, she had come to Bergen Belsen from Australia with her sister-in-law.  She started off the day in a wheelchair; later, we couldn’t keep up with her as she strode energetically from place to place at the former camp.

“This is my commandment, that you love one another as I have loved you.”

The day turned out to be quite different from our expectations.  We had anticipated a time of great joy and thanksgiving that the liberators had arrived and freed the prisoners.  We were honored to be in that place where Dick had participated in an event of such import. But the day was not as we had thought it would be, not as we had hoped.  The ceremonies were somber, focused primarily on the suffering of the past, the speeches almost exclusively in German.

And the rain.  It rained long and hard throughout the day, every once in a while letting up and then starting in again. Standing for hours in the rain listening to speeches that we couldn’t understand – quite different from what we had imagined the day to be like.

We had hoped to honor those who had endured unspeakable horrors in that place and also the liberators who had helped to end the reign of terror.  We had known there would be sorrow, yes, but we were counting on there to be joy as well. 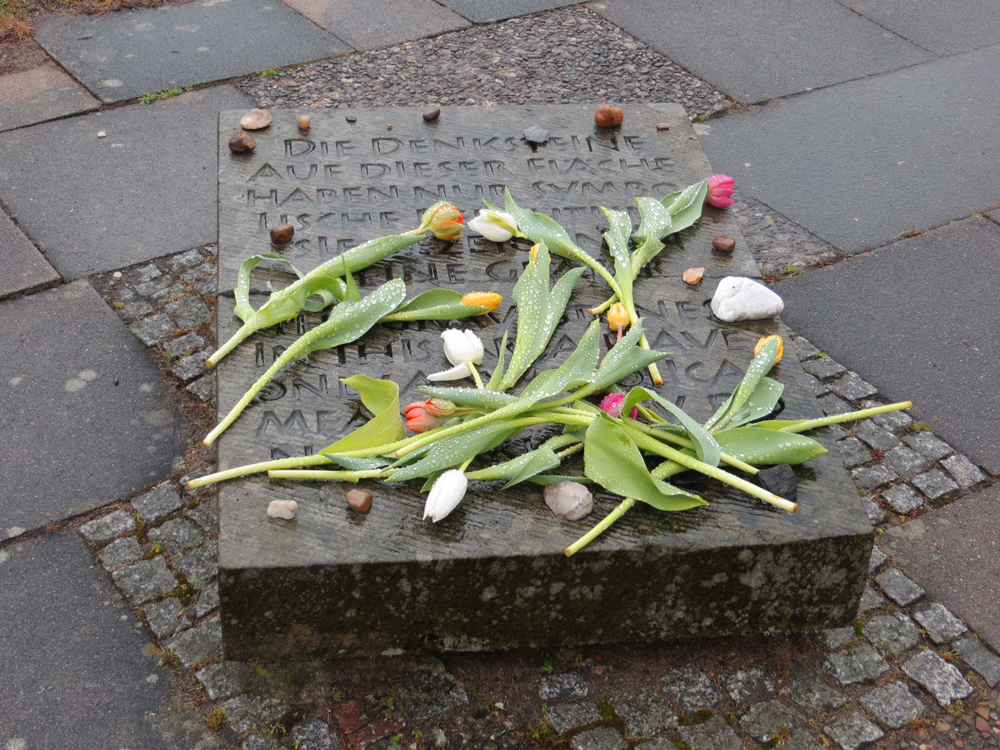 After the ceremonies, we were headed to a British military base nearby which is in the process of being handed over to the Germans.  There we would celebrate the liberators and witness the dedication of a plaque to them. Hetty told us to join her on her bus and said to me conspiratorially that there was to be a free lunch at the event and we should partake of it but just not tell anybody what we were doing. We opted not to crash the group getting onto the survivors’ bus, thinking that that sounded like something that would happen in a very bad movie! We did go on to the building called the roundhouse where the celebration was to be held, and we did crash the lunch.  And we were there for the unveiling of the plaque.

Days, weeks later, we continued to talk about how different the day’s atmosphere was from that we had imagined.  We seemed not to be able to get past it. And then, finally, one of our little traveling troupe said:  “But there was Hetty in her pink coat.”

Hetty:  fun, energetic, spirited, lively, joyful. In the midst of what she’s been through, in the midst of walking around and through that place where she suffered so mightily, she lifted our spirits, made us feel welcome, included, and took us under her wing.  She honored us by her attention and sent her good thoughts to my sister-in-law in Ohio.

Jesus commands us to love each other as he has loved us. Virgil tells us that “love conquers all.” And Paul tells the people of Corinth:  “And now faith, hope, and love abide, these three; and the greatest of these is love.”

Hetty personified love that rainy day at the Bergen Belsen concentration camp.  Her pink coat, her vivaciousness, her whole being infused with and brimming over with joy and fun, walking from site to site at the camp in her spirited step. Without once saying the word love, she showed us that day what love is. She fulfilled the commandment that we love one another. She showed us that the greatest of these is love. And she showed us that love does indeed conquer all. 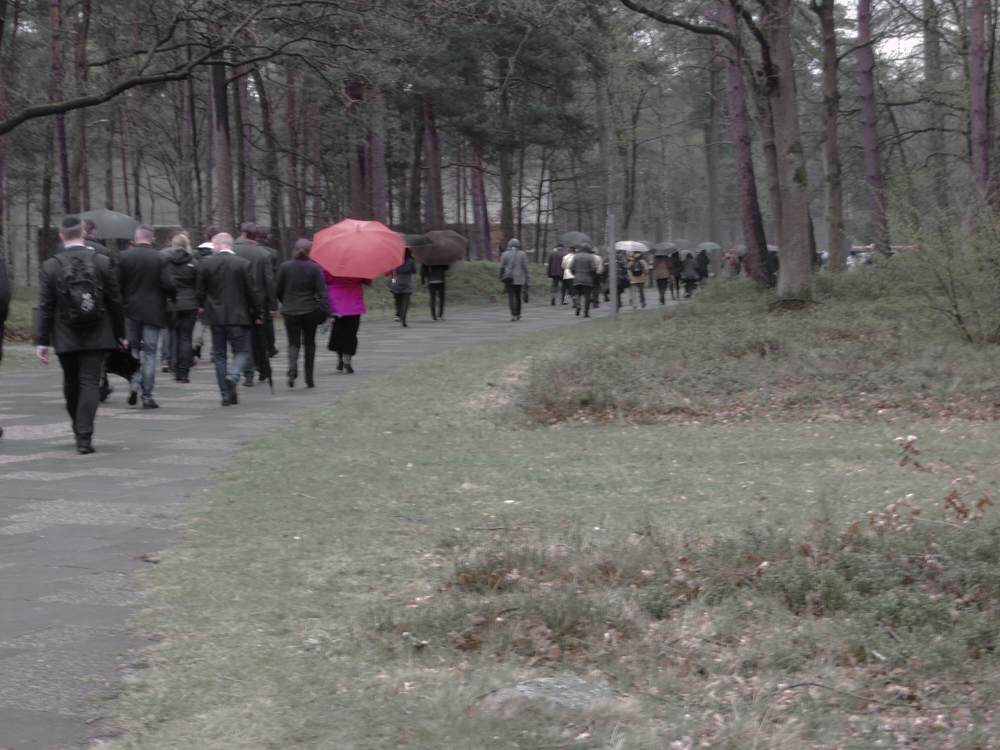 4 thoughts on “The pink coat”