It’s a great emoji:  The little yellow face is tilted to the left, with a teeth-revealing grin and pink tongue sticking out at the corner of the mouth.  Two eyes.  One bigger than the other, the smaller one with a centered black dot as its pupil, the larger one with its pupil up toward the top.  It’s terrific for using when we’re confused or dealing with a challenge or situation that is beyond our understanding.

Faith in many ways is about believing in concepts that our minds cannot grasp:  the magnitude of God’s love and compassion; Jesus’ power to heal; the Spirit’s presence within and about us to guide and to comfort.  And then there’s the Trinity — the three in one and one in three that describes the Godhead.

Recently, two parishioners from St. David’s Episcopal Church in Roswell, GA, shared their thinking about the Trinity in an effort to understand it more fully and how that incomprehensible concept connects with our faith and life.  They  have graciously allowed me to share their musings with you.  It’s powerful stuff, and they did it without having to rely on even one 🤪🤪🤪🤪🤪!

First, let’s hear from Mary Hogan, writing about the way in which the Trinity makes her think of  “home:”

This is the unified area where there is an eternal loving relationship the Father, Son, and Holy Spirit have for each other.  They have different origins but just one “essence.”  The Holy Spirit has, I believe, been working in me to see the face of Jesus in all humanity and in all creation and when I see the Son I, of course, see the face of God.  My goal is to be in this unified area with God as I was at my beginning.

And now, from Mary’s husband Phil, his “Analogy for Understanding the Trinity:”

“We believe in one God … ”  So starts the Nicene Creed which is a fundamental profession of our faith in our monotheistic Christian religion.  And yet this Creed goes on to establish the Trinity of God the Father, God the Son, and God the Holy Ghost.

Any second grader could tell you the first one doesn’t make sense when holding up 3 fingers and counting.

The second one suggests the one God is splitting his time between roles, varying the fractions based on circumstances.  But this concept would imply some role would be diminished by the ascent of another role.  To me this is also intellectually unsatisfying – an all powerful God should be able to ‘multi-task” (today’s jargon) all three roles simultaneously.

Instead, I’ve found the analogy using the simple chemical water (H2O) relates the three-in-one relationship of a Trinity.  God can take on multiple forms through transformations for his Divine purposes:

I believe in one God, and now have a simple way to also comprehend the existence of one God as a Trinity. 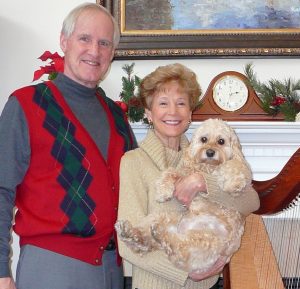 Thank you so much, Mary and Phil; you have helped to bring the Trinity to life for me, and I’m sure, many others.

4 thoughts on “Beyond the Emoji”